For the past four years, with the exception of last year because I was on the other side of the world, I’ve spent my birthday with my friend Taylor. Although a group of us were already going to Junkyard Golf on the Saturday to celebrate my birthday properly (because working life restricts mid-week drinking), I wanted to at least go out for food on the actual day. So this year when Tay asked where I wanted to go for dinner, my word-for-word response was “somewhere instagrammable”. I know, I’m ashamed of me too… 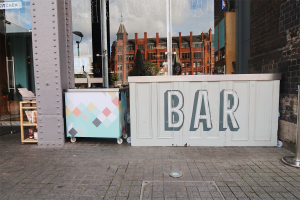 So with that in mind we chose Home Sweet Home in Manchester’s Great Northern area. I had walked past this place before and remembered stopping to drool over the cake display, whilst making a mental note to eat there asap.

The dinner menu had just started when we arrived, so I ordered the ‘Chicken in the Basket’ and Tay opted for the ‘Pulled Pork Pile Up’. It was definitely a filling dish and so tasty (I looove me some good chicken), but from the moment we walked in my eyes were on the dessert menu. 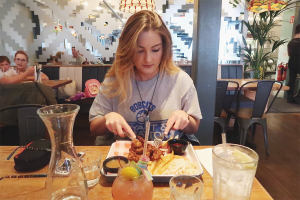 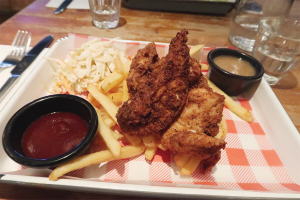 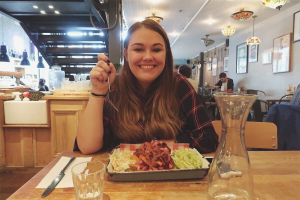 These cakes make you gain weight just by looking at them, but it was my birthday so yolo, and you certainly get your money’s worth when you buy a slice (read: 10lb chunk). I knew I wanted to try ‘Honey I Robbed the Kids’ as soon as I laid eyes on it, covered in bright blue icing and topped like a Woolworths’ pick n’ mix section, my out-of-control sweet tooth was more than satisfied. I had to take half of it home in a box because I couldn’t finish the whole slice in one go, so imagine my happiness when I opened the fridge the next morning and ate it for breakfast! 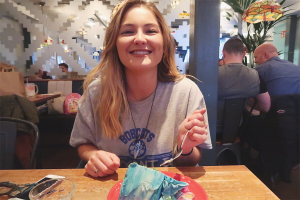 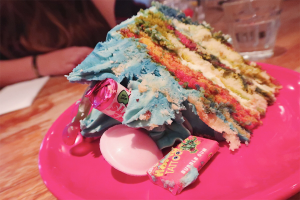 I’m so glad Taylor suggested we go out for the afternoon, and I know my relationship with Home Sweet Home will be like a revolving door (I give it a week until I’m back in there ploughing my way through the breakfast and lunch menus). So if you’re looking for a diner-like place to eat in Manchester and can’t resist eating a dessert that’s bigger than your actual meal, then visiting this restaurant should be at the top of your list.

Until next time,
Liv
xo

Oh my goodness I’ve been so excited for this post. Welcome to Blogmas day 8! Ever since Helen moved to Coogee we’ve been saying we’re going to take full advantage of the oven and cook some festive treats. Trying to find a day where we’re both off work has been a little hard but we found the time and I’ve been so excited to finally bake and make this post. We got the recipe from food.com but I’ll note down the recipe and instructions anyway because it was so fun to do and we hit a few bumps along the way. This recipe was for gluten-free gingerbread cookies as Helen is Coeliac, check out her blog here as she’s written a post about her experience with it and our cookie making skills. 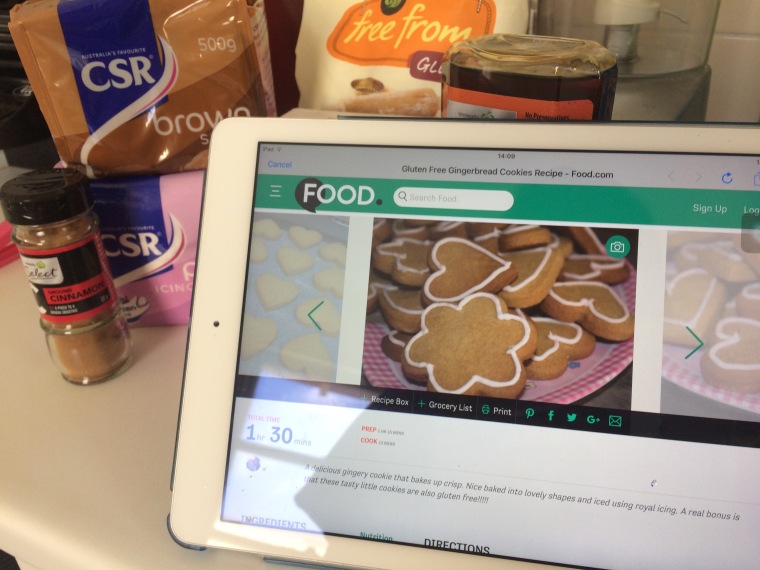 So we whisked together the butter and brown sugar, which was so messy because the butter wasn’t that soft, even after placing it in the pre-heated oven (170 degrees Celsius) for a few minutes. After whisking in the golden syrup and egg we added all the dry ingredients and mixed them in gradually until we had quite a thick dough. A quick lick of the spoon and it was ready to be covered and refrigerated. Depending on the temperature of your fridge I’d recommend varying the length of time you keep it in there for. The instructions say 1 hour but when we took it out and tried to knead it it was still very wet in the centre. This might have been due to the amount of flour we put in the mix but we stuck to the recipe so maybe not. 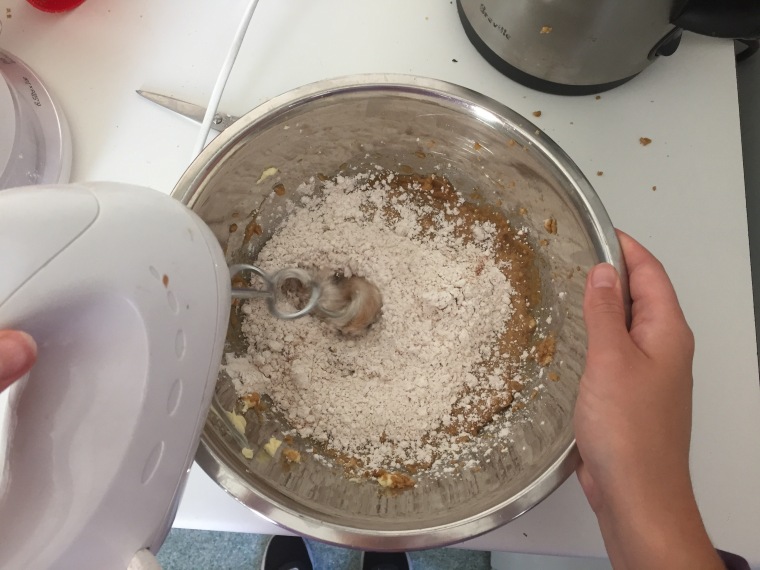 This is where the chaotic part came into play. First off we didn’t have a rolling pin so we had to cover a glass in flour and just go with it, then we discovered how sticky and wet the dough was when we tried to cut shapes into it because we didn’t have any shape cutters either. It got EVERYWHERE.

So ditching our original plan of cutting them into candy cane and snowflake shapes (we were just going to draw shapes onto paper, cut them out then slice around them), we just rolled the dough into small to medium sized balls, placed them into the cake tin and flattened them into circles from there. This turned out to be so much easier than cutting into the sticky batter but although the recipe said it made 30 we only got 12. We probably could have stretched it to 16 if we didn’t rinse away all the batter that got stuck to our hands and chopping board.

The oven was already heated at 170 and the instructions recommend around 15 minutes. The cookies rose a significant amount so they turned out a bit thicker than expected and a few stuck together. They took around 20 minutes to bake, give or take a few minutes, as we took out the top tray first and let the bottom tray bake for a tad longer. Waiting for them to cool was so tedious because all we wanted to do was get stuck into icing and decorating them. Once they had cooled down enough we made up two bowls of icing sugar; one red, one white. 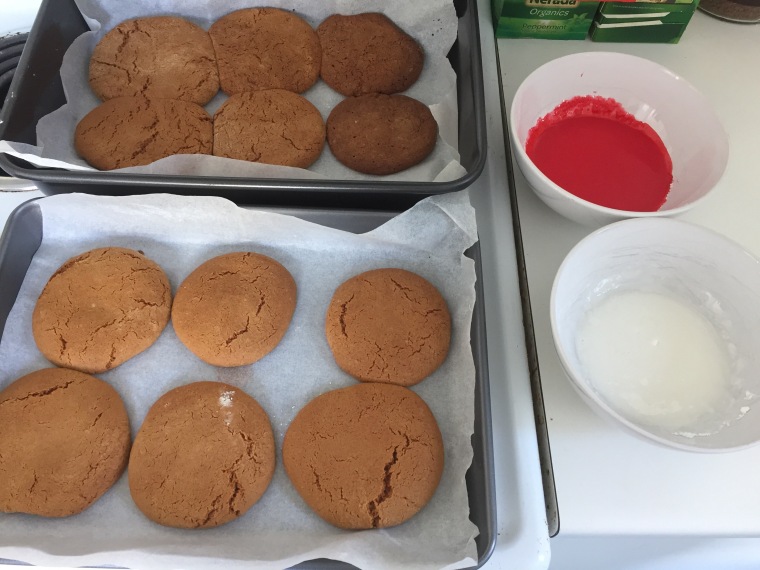 Because there were 12 we decided to just decorate 6 each whatever way we wanted. A really good idea we had for this was to create little makeshift piping bags from sandwich bags, so we poured the icing into separate pouches, squeeze them into on corner and cut a tiny bit of the corner off. This turned out to be a lot easier and more efficient than spreading it with a knife or pouring it on with a spoon as it made the icing flat and even and it allowed us to decorate them with patterns. And voila! The finished product: 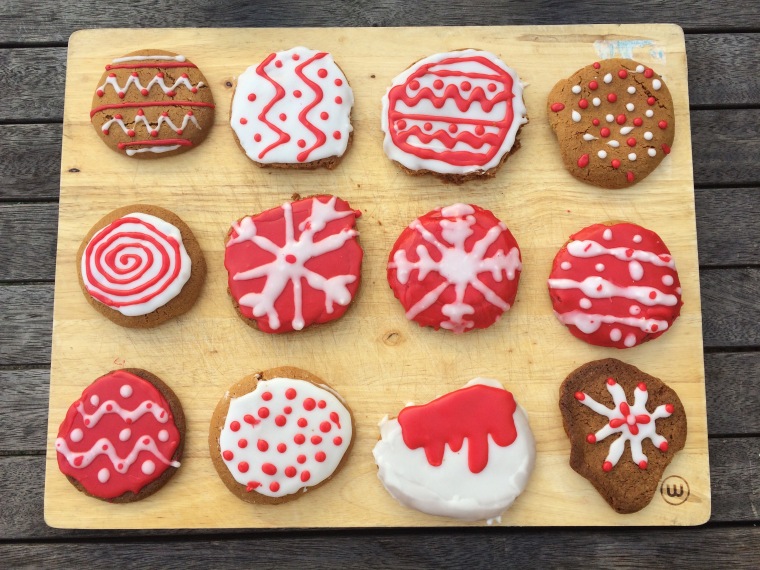 Granted our icing skills may need a little work but they tasted delicious. I’m so pleased with how these turned out and even though they’re still really sugary they’re a tad healthier than normal because they’re gluten-free. We’re planning on making a festive cake a few days before Christmas, so keep your eyes peeled for that post nearer to the 25th. After the clean up was done and the icing had dried we enjoyed them with a nice cup of tea in the sun.

Hello and welcome to Blogmas day 3! This post was actually meant for day 2 but I decided to change it up a little so I had more time to write it. Because I don’t have an oven in the hostel I had a look online for some no-bake recipes, then remembered the classic crispy cakes everyone made at least once in primary school, most likely for Easter with mini eggs for the toppings. I feel like I don’t need to write out a recipe or a step-by-step for this because they’re so simple to make and pretty much everyone has already done them before. However this would be a super short post if I didn’t say just a little something about it.

I always laugh when people buy frozen pizzas and then realise there’s no freezers or an oven to cook them in, so when guests were walking into the kitchen and saw Maya and I preparing these I’m sure they thought the same. But all we did was break up two bars of Coles Belgian chocolate, which is bloody lovely by the way, melted them in the microwave, then poured them into a big bowl of Rice Krispies and mixed it all together. As easy as pie. We looked for mini marshmallows at the store to make them look more Christmassy but had no luck, so instead we poured them into festive-themed cupcake holders and stuck santa and reindeer decorations on them. Cute, I know.

We then stuck them in the fridge for around twenty minutes and voila, we had twelve crispy cakes ready to eat, and by ready to eat I mean I ate all six of mine before the day was over. And yet I wonder why I’ve been putting on a little podge…

So there you have it, this is basically what I did yesterday morning then went to the outdoor pool in Prince Alfred park to work them all off. My friend Helen has said I can use her oven to make actual cakes and mince pies so I think we’re going to do that at some point this week which will be super fun. If you have any suggestions on what we can make leave a comment below.